The project took place in the central-southern part of Somalia, more precisely in the regions of Bay and Gedo, in the villages of Baidoa, Dollow and Luuq.

Somalia is in a situation of extreme humanitarian crisis due to the acute drought caused by El Niño, the insurrection of Al’Shabaab and the general insecurity of the country. The sum of these situations led to the displacement of over 1 million people and has made basic services almost inaccessible for 6 million Somalis. In March 2017, more than 3.000 people were forced to leave their homes every day.

Overall, it is estimated that 5 million people need some form of humanitarian assistance, of which 1.1 million people are in a situation of serious food insecurity and struggle to meet their daily dietary needs.

About 320.000 children under the age of five are suffering from malnutrition, of which 50.000 are severely malnourished. 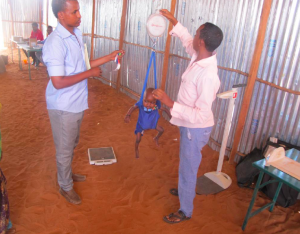 The project ensured water and adequate hygienic conditions to reduce the spread of diseases. At the same time, activities were also planned to guarantee food supplies for the most vulnerable families, reducing the risk of malnutrition, especially for children under the age of 5 years, and offer support for livestock which is the only source of income for these families.

The interventions in the field of water and hygiene specifically concerned the distribution of vouchers for 1.500 families in order to access potable water (the vouchers are distributed to the most disadvantaged families, and can be exchanged with local sellers, previously selected, in exchange for water and food). COOPI has also foreseen the distribution of tanks for water conservation, thus avoiding the risk of being contaminated, as well as tablets to purify the water. At the same time, awareness-raising activities on hygiene practices were carried out to avoid diseases transmitted by contaminated water, such as cholera.

Concerning the activities on fighting malnutrition, COOPI has distributed to the families vouchers for the purchase of something known as a MEB (Minimum Expenditure Basket), a basic basket that includes food and other essential products for a family: sorghum, vegetable oil, water sugar, kerosene, firewood and soap. Also, in this case, awareness courses have been planned for mothers and young women to disseminate good nutritional and hygiene practices to prevent child malnutrition and other diseases. Some basic concepts that have been discussed in these courses regard the importance of breastfeeding, weaning, the diet of a breastfeeding mother, food.

The project was aimed at 2.420 families, which will improve the conditions of a situation in which 14.520 people are affected by the crisis. Of these, 8.000 are children, 4.000 of whom are under the age of five.

Families have been selected with the help of village committees, composed by older men and women who know the needs of the inhabitants very well. Specifically, these are families who have lost their livelihoods due to drought or who for this reason have had to migrate. Among these, families in which the head of the family is a woman or in which there are disabled, malnourished children or other vulnerable categories have been given priority.