Lebanon: emergency aid after the explosion

It was around 6 p.m. on 4 August 2020 when Beirut was devastated by the explosion whose tragic images were reported in the newspapers and on the news.

Matteo Crosetti, COOPI Coordinator for the Middle East in Beirut, remembers that moment as follows: "The loud roar was heard all over the city and the shock wave hit up to 20 kilometres away from the port where the explosion occurred, causing enormous damage throughout the port area but also in the residential areas where houses and buildings were destroyed".

There are 150 victims, 150 missing and over 5.000 people injured. In addition, it is estimated that more than 300.000 men, women and children are homeless. The images of this disaster leave one speechless.

In the wake of this new emergency, the COOPI network immediately took action: together with the Lebanese NGO Mada, we bring hot meals, sandwiches, fruit and vegetables to the population. The conditions in which these families find themselves are dramatic and emergency aid is essential to ensure water and food for the survivors. 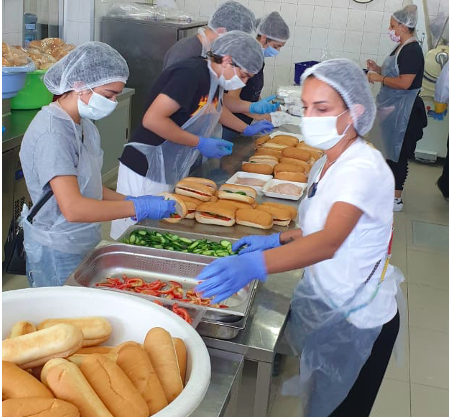 COOPI Suisse's project is helping to distribute food to the victims of the explosion in the area near the port, including Karantina, Bourj Hamoude and Zalqa.

The direct beneficiaries are

The indirect beneficiariesare theentire neighbourhood communities that can benefit from the restart of small business activities. The duration of the project is from August to October 2020.

The duration of the project is from August to October 2020.